It is estimated that Ghana produced 8,153,426 oz gold during the period 1493-1600, which accounted for about 35% of the world output. Asante (and related Akan-speaking groups in Ghana and the Ivory Coast) carried out nearly all minor and major transactions through the medium of gold dust before the late seventeenth and early eighteenth century. Many travellers and traders stated that gold dust had long been the main currency in parts of Ghana and Gold Coast.

The price of most goods and services were fixed in terms of particular weights of gold-dust. For each transaction gold-dust was weighed out against a weight of known mass, each party to the deal using his own weights to check against cheating by the other. Thus, in the past, anyone involved in trading owned, or had access to, a set of weights and the associated equipment.

Asante gold-weights: manufacture and use

Weights were probably introduced into the Akan areas via the gold-trade from the North and some early forms of weights may have been based on Islamic prototypes. It seems likely that trading with gold dust and the connected used of weights developed in the region because of outside influences.


The earliest weights produced by Akan goldsmiths were based on those used by Islamic traders. Historically, goldsmiths were responsible for making other items of equipment that were used in the weighing of gold, such as the cast or riveted brass boxes for storing gold dust (adaka), shallow brass scoops used to remove impurities (famfa) and highly decorative brass spoons (nsawa) for putting the dust onto the scales (nsania).

Customarily, when a boy approached adulthood he would practice weighing gold dust using a small set of weights, miniature scales, spoons and scoops.

All weights can be divided into two broad categories: those of natural origin such as seeds, stones, shells, bones and flints which are not cast in metal; and those manufactured by man using a variety of methods. gold-weights (abramoo) are small lost-wax castings used in weighing gold-dust. Gold-weights manufactured by man are commonly subdivided into figurative and geometrical weights. Those which represented in miniature objects, creatures, and situations from local life and those which do not seem to have been modelled after any pre-existing item, that is, they had no external referent. Non-referential weights are usually called geometrics or geometrical by European writers are in forms of discs, stepped pyramids and rectangles. In the local language there is no simple way of making this discrimination although Asante clearly recognise it. To the Asante the significance of the physical form of gold weights, in some way, have a verbal or proverb component or aphorisms (ebe), especially those displayed around their political leaders.

The artefacts depicted as weights show great variety and, at first sight, appear to encompass nearly all areas of Asante’s life and nearly all of their cultural categories. Common objects such as metal workers’ tongs, small balance scale, gold dust boxes, musical instruments, all miniature in size. Human figures are also depicted: men walking to their farm with their tools, women with children, priests carrying on their heads the shrines of their gods. Numerous animals and other creatures are depicted, either singly or together: leopards, antelope, tortoises, snakes, birds, lizards, frogs etc. Especially interesting are the weights in the form of insects, small fruit, and the seed of certain plants as these were cast from nature, using the actual insect or seed and not wax sculptures.

On the level of total subject matter, weights reflect an underlying Asante’s categorization of things in their universe. But their meaning to the Asante is also governed by the way the object of particular weight is linked to particular verbal formulae. An individual weight, therefore, is meaningful in terms of the way the thing it depicts is embodied in a saying or proverb (ebe). Figurative forms are often representations of traditional sayings and proverbs. For instance, the meaning of the weight where the two men are portrayed, one climbing up a tree, another one helping him, is that the one who chooses the good tree or the good path, will always find a helping hand. A weight of a crocodile holding a fish in its mouth may lead to two sayings being offered: one that if the mudfish gets anything it ultimately goes to the crocodile, the other that only bad crocodiles prey on fish which share the same stretch of river. The proverb is accepted as having a metaphorical force.

Proverbs were formerly of the greatest importance in Asante life. They were seen as incorporating traditional knowledge and wisdom and senior men and women were expected to know large numbers and how to use them. The use of images with a proverbial component is especially frequent around chiefs and their officials in Asante. Chiefs and their spokesmen are expected to know and use proverbs in discussing important and difficult affairs.

Some weights are associated with no proverbs. The majority of weights of such, that is the many thousands of geometrical weights, are generally accepted by the Asante as being without a proverbial dimension because no external referent can be recognized for them. They do not represent and therefore they cannot suggest metaphorical relationships.

The geometric weights are most often in forms of discs, shape of cubes; double (hollow) cylinders, hexahedrons, stepped pyramids and rectangles. Such small blocks or discs would make the most economical use of scarce supplies of imported brass. Many geometric weights are decorated on one face with designs in straight and curved lines. It is just possible that, in the past, some of the straight or cursive designs in some weights were seen as being representational: similar low-relief designs on buildings are sometimes viewed in this way today. An s-curve, for example, may be interpreted as a highly stylised bird form and one or more sayings about birds then given as its significance. However, there is no rigid one-to-one significance between an object and the saying. Some objects entirely lack this verbal strengthening or extension of their semantic power.

A geometrical gold-weights, for example, is used with other objects – beads, pieces of precious stones or fibres, in various forms of divination, signifies wealth. 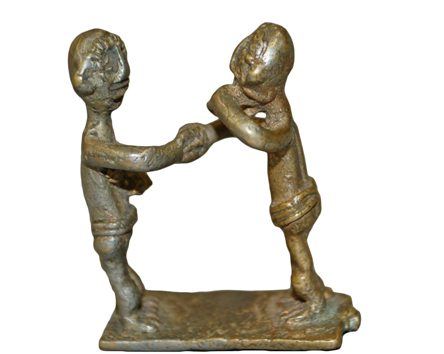 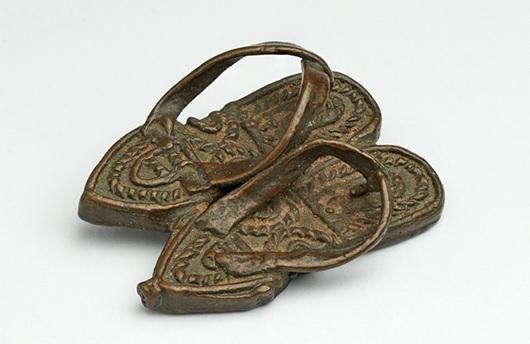 A goldweight cast in the form of chief’s sandals, 18th-20th century 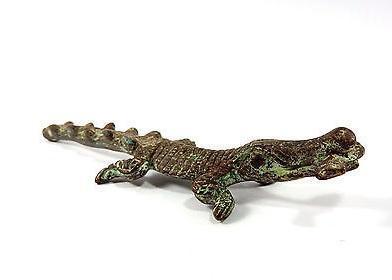 A weight of crocodile and mudfish 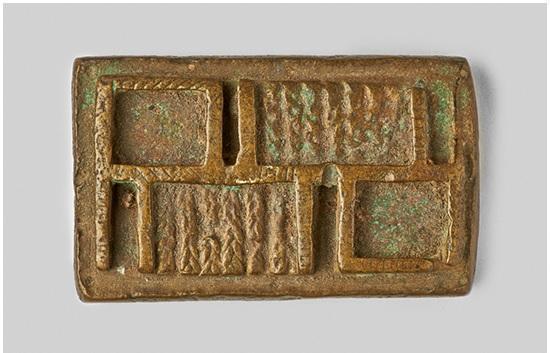 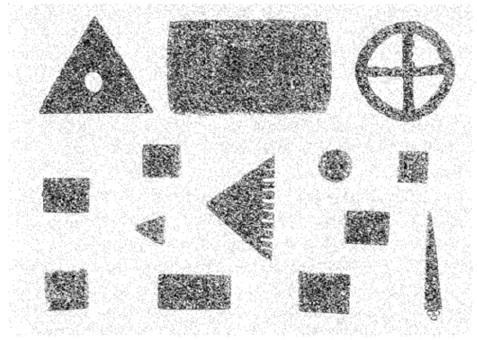 A selection of geometrical gold-weights