Starting in the 1500s, historical accounts state that the chief or custodian of the keys (safwahene) used to display massive bunches of keys (nsafoapim) which probably served to indicate that the owner controlled access to innumerable items of value and concomitantly also had commercial links with European traders. However, the display of keys not only signified wealth and eminence in this context but also symbolically signified that the owner had the authority to cross physical and metaphysical boundaries and access people, knowledge and resources that were beyond the reach of others.

Representations of keys and locks were also cast as goldweights, formed as the composite elements onto bracelets and necklaces. The locks and keys in other contexts may relate to physical and spiritual protection and security.

Amulets with it's multitude of miniature keys echoes the enormous bunches of European keys (nsafoapim) carried by the chief or custodian of the keys (safwahene) that signified that the bearer had unlimited access to all areas of the palace and therefore to power and patronage and the wealth of the chief and of the Asante nation.

From the 19th Century (before 1874), triangular amulet cases were extremely popular with the Asante to avert ‘all evils but sickness, (which they can only assuage) and natural death. The symmetrical geometric shapes such as squares, trianlges or circles that are believed to possess spiritual balance. Interestingly, the same configurations also inform the design of Asante war shirts (batakari) and funeral cloths (adinkra). Silver and gold repousse cases (like this) are normally reserved for persons of rank.

Also, there are two types of bells in common use in Asante: the flared-lip, open type with attached clapper always associated with state stools and often seen in miniature versions as an ornament to provide its noise-maker. Bells, of the first type, were customarily bound to ancestral stools in order to call the spirits of the departed, and those attached to the Golden Stool were rung to summon the Asante people. Miniature representations of bells were also cast in the form of goldweights, strung as composite elements onto ornaments and appeared as part of the decorative schemas of cast brass kuduo vessels.

Hollow lost wax cast gold bead (ewontomanu) in the shape of a bi-cone cylinder of septagonal cross-section was worn by the Asantehene or a paramount chief with others around his waist or knees, underneath his clothing on festive occasions. Beads of this type are called ewontomanu or ‘under cloth’ or clothing beads. Beads of this shape can be traced back at least a thousand years in the Middle East and it was probably introduced to West Africa through the trans-Saharan trade.

Lost wax castings in gold of two open-work crescent-shaped beads (bosome) with integral suspension tubes has identified this item as representing the moon, which symbolises faithfulness. There are also beads in form of discs. The body of the flat disc is decorated with a series of patterns which represented the culture and nature environment. For example, while the circular beads are called senzem meaning setting sun, the open-work concentric circle pattern with a centre consisting of spirals, the design of which is known in Asante as akyekyedee akyi (or akyiri), ‘the back of the tortoise’. Other common shapes of beads in gold included the forms of pyramids, spheres, seashells, bells, flywhisks (sikampra), drums, disc, a stylised human molar (dodmsen/dodomsee) with tri-partite splayed root and animals, such as palm beetle (asomorodwe) and chicken’s head, which all reflected Asante’s culture and living environment.

Female members of the royal household also worn bracelets and necklaces to show their wealth and royal identification. Bracelets were in different patterns with gold only or with a combination of various types of beads and/or charms in gold and non-gold materials. Necklaces were commonly find in gold and disc beads in a golden colour. Necklaces can be with or without pendants.

There were finger rings, toe rings and earrings found in Asante Empire. The pieces of artwork decorating on the rings can been in patterns, animals, such as lion, or animal-related things. they have their symbolic meanings reflected Asante’s culture and living environment.

For example, the lion (gyata) was seen as symbolic of power and represented the bravery of the chief; circle pattern illustrates the tostie’s shell; bird's nest refers to the idea that a chief will always return home just as a bird returns to its nest when it has been away.

Besides, the styles of the rings represented the identification of the owner. A stylised design, known as kokoromutika, represents babadua canes or ropes tied in three places. The symbolism alludes to the idea that, like the chief, they are strong and can last for many years. It is probably associated with proverbial meanings too. This type of ring is worn only by chief’s on their thumb.

Kidney-shaped caps (krobonkye) are typically worn by sword-bearers and gun-beareres at important state ceremonies. The ornaments on the crest of this cap are similar in form and decoration to military ornaments found on European military and some civilian uniforms.

The ceremonial helmet (denkyemkye) made of antelope hide with a scalloped fringe and long cheek straps situated on either side. The straps have additional pieces of hide attached to the ends which have long tufts of antelope fur sewn to them. The helmet, flaps and fringe have twenty ornaments added to their exterior surfaces arranged symmetrically in groups. All have wood cores which are plated with sheet gold held in place by thin gold wire staples. Ceremonial hat possibly worn by a sword-bearer of the Asantehene or the Asantehene himself.

In terms of ornaments, the wearing of real and cast gold shells is originated from a widespread belief among Akan communities that they protected people from lightning strikes, from bullets and other projectiles. Gold feather is another example of ornaments. Items such as human skulls, teeth, jaw bones and thigh bones were also attached to ornaments occasionally. 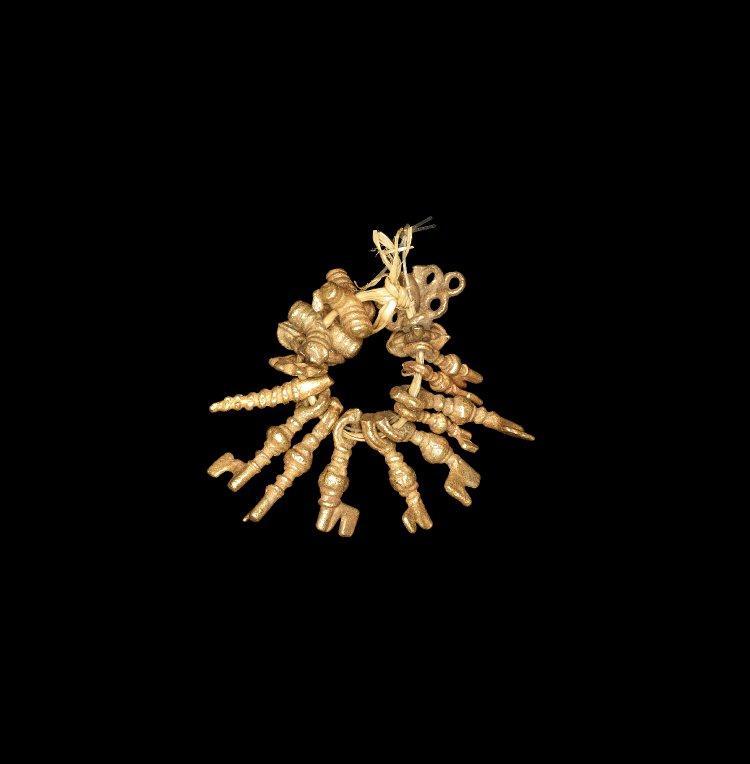 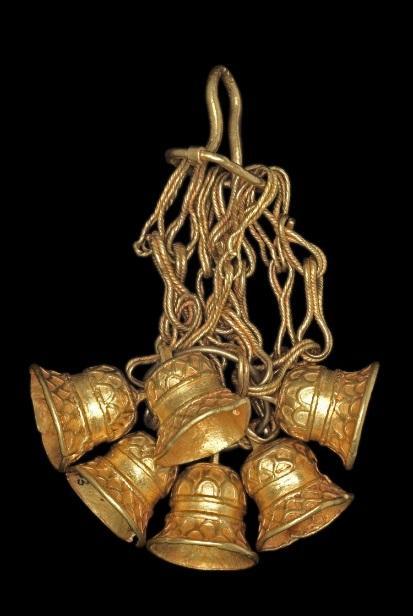 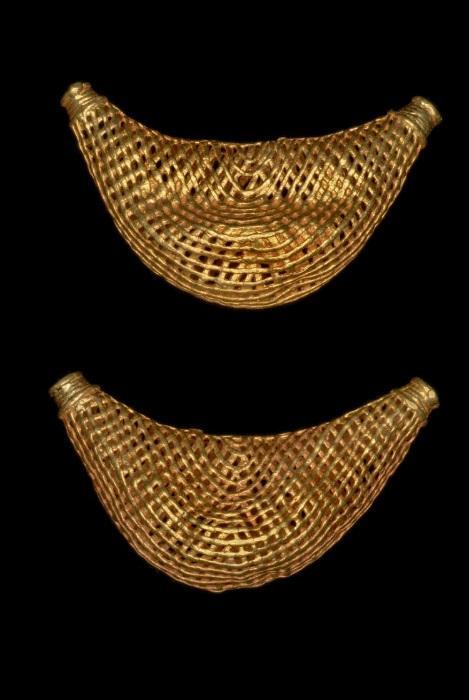 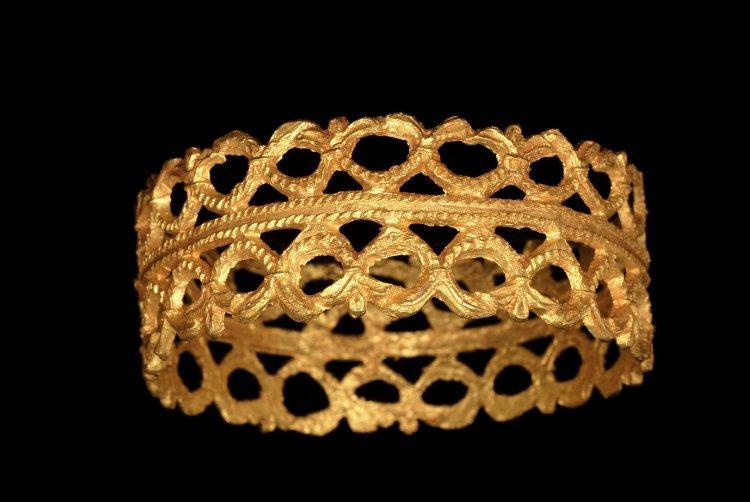 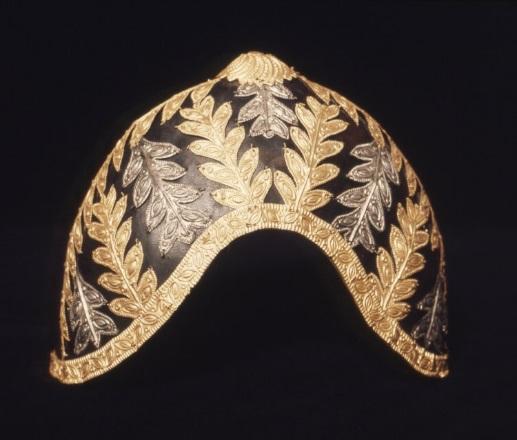 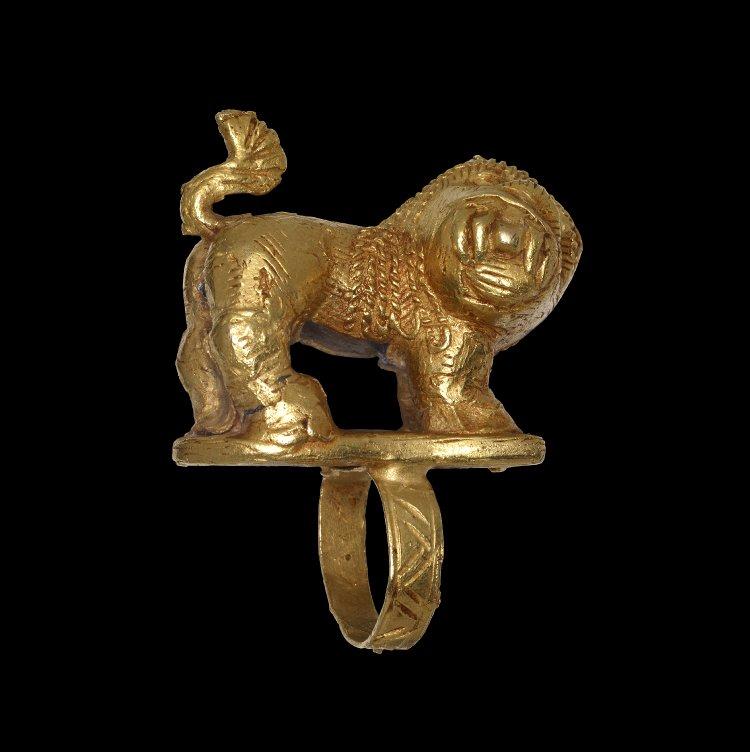