From the 17th century ad onwards European staffs were regularly presented by trading companies to Gold Coast chiefs. These staffs were essentially ceremonial batons, similar to those held by Majordomos during public parades. During the late 18th and early 19th centuries they became increasingly associated with royal linguists or spokesmen called okyeame (pl. akyeame), who were traditionally responsible for mediating all verbal exchanges between the Asantehene and his subjects. These specialists served in a number of different capacities including that of counsellor, historian, judicial advocate, military attaché, foreign minister and ambassador.

The staff (okyeame poma) has become a badge of office which is carried in public processions and whenever the linguist conducts any official business or speaks to the ruler that he serves. From the late 19th century, staff finials were made so as to be interchangeable and they increasingly depicted figurative as well as abstract subjects that allude to well-known proverbs and sayings.

Imagery on the finial of linguist staffs typically illustrates Asante proverbs about power and institutional responsibilities. The above image, a spider on its web is flanked by two figures, representing the proverb: “No one goes to the house of the spider to teach it wisdom.” The spider is a fitting symbol for respect due to a person with great oratorical and diplomatic skills. In Ghana, Ananse the spider is the bringer of the wisdom of Nyame, the supreme creator god of the Asante, and is the originator of folk tales and proverbs.

The practice of smoking tobacco was introduced into the Gold Coast from two different directions. It first spread from western Sudan and Senegambia into the northern forest region during the early 17th century and it was also introduced independently into the Accra area by the Dutch around 1640 ad (Ozanne 1971, 54). Pipes (taasen) for smoking locally grown tobacco were used by adults of both sexes, royal and non-royal alike.

Tobacco pipes for high-status individuals are made of gold or silver, and are displayed in public processions during major celebrations. By the 19th century Asante pipe bowls were made in a variety of complex abstract and representational designs.

It is not known when these prestigious items of regalia arrived in the Akan region or from what direction. Canopies and sun-shades were documented as being used by the rulers of North African kingdoms such as Mali in the 14th century ad but they could also have been introduced from East Africa, which suggests an Asian origin (Al-Umari quoted in Levtzion & Spalding 2003, 55). The state umbrella of the Asantehene, which is known as Boaman (lit. ‘Conqueror of all Nations’), and those of important chiefs are very large and can accommodate upwards of 10 people.

One of the principal functions of an umbrella is to create and maintain a cooler shaded environment beneath its coverings during long public events. When it is manipulated correctly, an umbrella can promote a constant circulation of air as its bearer (kyinie kyimini) thrusts it up and down and twirls it round. Umbrellas are topped with finials (ntuatire) carved from wood in a variety of abstract and representational forms and covered in gold foil. The subject of an umbrella finial, like other abstract and representational regalia, is intended to call to mind proverbs associated with the strength and wisdom of its chiefly owner. 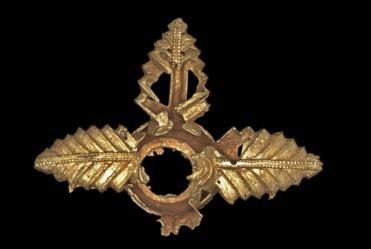 Above and below: Linguist Staff 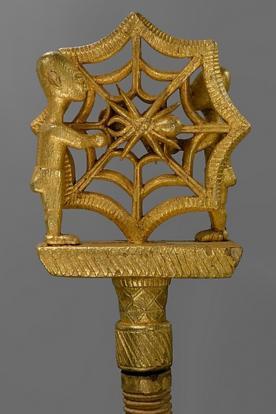 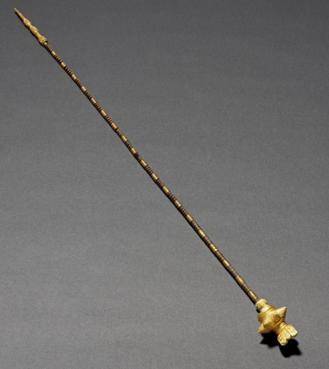 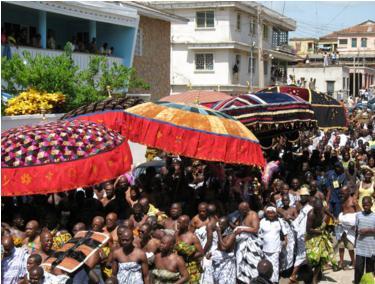