It is not known when state swords were first introduced into Akan communities, but early examples probably derive from Islamic weapons that were passed along the trans-Saharan trade routes. The use of state swords on the Gold Coast was recorded by the end of the 16th century ad and they have continued to play a significant role in ritual and ceremonial contexts ever since. There are several distinct types of state sword normally found in the regalia of the Asantehene or of a high-ranking chief. By far the most important of the ceremonial swords are the keteanofena (lit. ‘edge of the sleeping mat swords’) which are revered and passed from an Asantehene to his successor. This group is composed of two major sub-divisions: the akrafena and the bosomfena.Akrafena, or ‘swords of the soul’ are used, as their name suggests, in fairly restricted, often private rituals for the purification of the Asantehene’s soul, while swords in the bosomfena division play a more varied and public role.

The division of these swords into two groups embodies and represents two distinct spiritual elements. Those carried on the Asantehene’s right (akrafena) represent his soul or life-force (kra) and are washed, along with other items of regalia, as part of the annual soul-cleansing ceremony (odwira). The swords carried on the Asantehene’s left (bosomfena) represent his ego, spirit or personality (sunsum) that he inherits from his father. This complementary division of regalia also mirrors that of the Asante court, which presents itself during public occasions in the form of an arc with distinct right and left wings as discussed earlier. The third and somewhat more common name for the swords in the bosomfena category is nsuaefena (lit. ‘oath swords’), which reflects the fact that they are used by the Asantehene to swear his oath of office during installation ceremonies and by the lesser chiefs. These swords may also function as badges of office that vouch for the veracity of official messengers who are entrusted to deliver verbal communications.

A sword (afena) with a grooved cast iron sword blade decorated with incised and punched decoration on the left side only. The narrow part of the blade nearest the hilt is decorated with an incised herring-bone pattern and a row of five circular punch marks, each of which are highlighted with a single ring of dots. The curved part of the sword blade also has four small circular holes punched through it. The wooden barbell-shaped hilt and grip are carved with a series of geometric designs which are covered with gold foil. The foil is secured using small staples made of gold wire.

State sword (afena) with slightly curved cast iron blade decorated on the left side with grooves, dot punching and open-work in the form of a geometric slot situated two-thirds of way along its length. The blade is inserted into a carved wood bar-bell-shaped hilt surmounted by a conical boss, all of which is covered in gold foil and decorated with repoussé geometric patterns. (b) The sheath is constructed from two types of skin; the front is made of three pieces of ray or shark skin sewn together and the right side is made of a single piece of antelope skin. The front and back of the sheath are joined at one side with thin cane strips stitched in herringbone pattern; the other side is open but has six leather strips to secure it.

A state sword (afena) with slightly curved cast iron blade, pierced along the lower cutting edge with two arrow-shaped voids and an equal-arm cross motif. These voids are surrounded by punched line and dot patterns. Near the hilt there are two incised grooves filled with a herringbone pattern and five circular punch marks. The wooden hilt is bar-bell-shaped and has distinctive rounded pommels either end of the grip. The hilt is decorated with a series of carved geometric designs which were originally covered with gold leaf secured by small gold-covered (?) staples but only a small amount remains in place.

State sword (afena, Mpomponsuo) with curved cast iron blade pierced along the outer cutting edge with circle and triangle motifs and decorated along front face with punched designs. The wooden hilt is bar-bell shaped with distinctive rounded pommels at either end of the grip whic hare covered with leopard skin. The central cylindrical grip is covered with gold sheet secured with small staples made of gold wire (?). The end of the second pommel previously had a conical gold boss which is now missing but the gold disc to which it fitted remains.

(b) Sheath (boha) is made of leopard skin folded over along one side and secured with six hide ties where the edges meet. The inside of sheath is lined with leopard skin. A rectangular piece of leopard skin is attached to the top of the sheath and bears six rectangular amulets (safis); three covered with gold leaf and three with silver leaf, all with repoussé decoration. There are also two triangular amulets (safi); one of which has lost part of its gold covering revealing the leather covering beneath.

(c) The lost wax cast hollow gold sword ornament (abosodee) depicts a coiled snake, (probably a python) gripping an antelope (possibly a dyker (otwe) in its jaws. The inside of the ornament is filled with scraps of red woollen cloth of European manufacture, perhaps imported Witney blanket.

(a) State sword (afena) consisting of a slightly curved cast iron blade inserted into a carved wooden bar-bell-shaped hilt surmounted by a conical boss and covered with gold leaf attached by small gold or brass (?) wire staples. (b) The left-hand side of the sheath (boha) is made of five separate pieces of ray or shark skin and the reverse consists of a single piece of antelope skin which are joined at one edge with thin cane secured by strips stitched in herringbone pattern; the other side is open but secured with eight leather ties. (c) The sword hilt is embellished by two identical sheet gold discs (nmem abosodee) with five raised bosses arranged symmetrically and decorated with repoussé work. They are positioned back-to-back and are attached by means of a gold tang that has been inserted into a slit in the underside of the hilt and wedged in place by small nails. 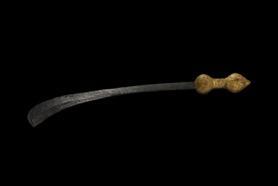 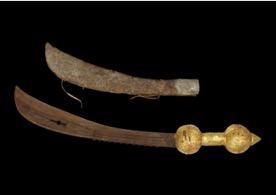 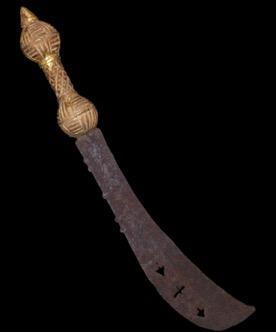 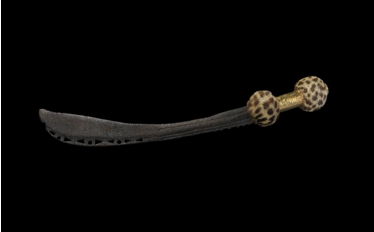 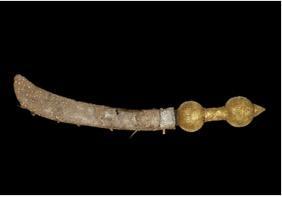